Call of the Road

I tried not to listen.

The forecast for Justin, Texas on April 7 uncharacteristically mentioned the word "snow". After the prior week or two of nice warm spring weather, cloudy, windy, cold, and snow did not sound inviting. Staying in the house and sipping coffee sounded inviting. Yet, the call was there...and it was hard to ignore.

Almost all the warm clothes were at the camp bunkhouse and preparations for riding in cold weather were lacking. So I tried not to listen, but time and opportunity were there. There were other clothes on hand that would suffice for a short ride. A big, puffy down jacket, a cap with ear flaps, and a pair of wool socks for gloves. Not optimum for riding, but okay for a short ride. 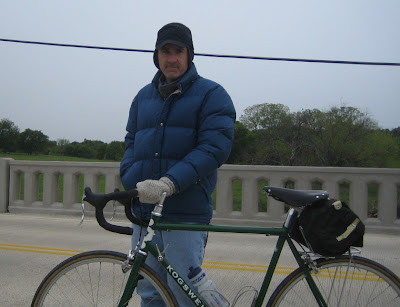 The route went by a local coffee shop. Apparently, there is some controversy here. The City of Justin seems unwilling to renew some kind of permit and the business seems destined to disappear. This in spite of fairly wide-spread local public support for the business. I don't know the details of the permitting and political issues here, but to me it would be nice if this business could stay around. 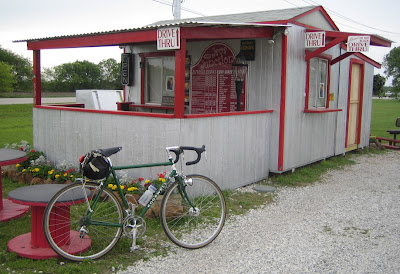 The route went north on FM 156 until the shoulder disappeared. Then for a few hundred yards, it seemed better to ride through a construction area instead of a narrow 2-lane highway with no shoulder. This is one of those real-life applications of my fatter-than-racer-type tires. 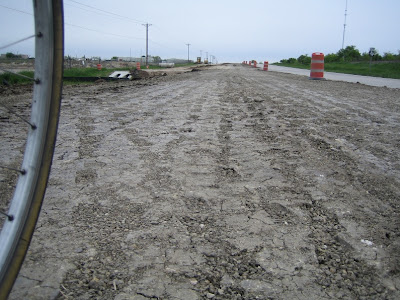 Once past this rough road area, lightly traveled areas were abundant. One short stretch has numerous trees on each side of the road and pleasant rolling hills. Here is a photo of a short climb out of a valley with small creek crossing. With the north wind blowing from behind, it was pretty easy to spin up this time. 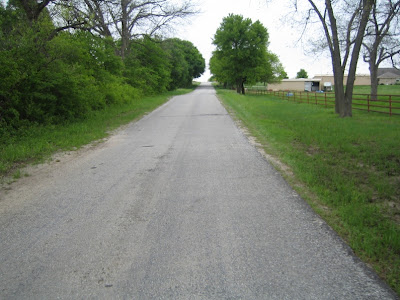 On the way back home, I passed by the Justin Barber Shop. It looked like the line was fairly short, so I went in to get that task done. During the entire ride, there were occasional snow flakes drifting around. However, when I sat down in the chair for my haircut, I had a nice view out the window and saw the snow coming down more seriously. Large abundant flakes for several minutes. It was an amazing sight to this Texan in April.

Even with the colder-than-normal temperatures and the make-shift cycling attire, it was a great day for a bike ride.
Posted by Pondero at 11:35 AM