When all you have is a hammer...

...everything looks like a nail. At least that is how I think the saying goes.

If so, it seems wise and it applies to my current earthwork project. Clearly, I haven't a clue about what I'm doing. I've got a tractor and I need to move a little dirt from here-to-there. Simple, huh? Not for a city-boy. If you've been following this blog, you'll know I've already admitted to being the object of hilarity as I try to figure out rural life. I'm guessing that there is some tractor implement and/or special technique that I do not have.

What I do have is a small tractor with front-end loader, a mower, and a box blade. I've already tried leveling my driveway with the front-end loader. Hilarious. I figured I'd just scoop off the high spots and drop 'em in the low spots. Nope, not me. The result was a saw-tooth pattern in the driveway that looked and felt a lot like what we used to call on the motocross track "whoop-de-dos" or "whoops" for short. Whoops, indeed.

I can learn a lesson. This time, I'll use the box blade (my hammer). The project (nail) is to fill-in a low area on the north side of my concrete driveway. The plan is to move dirt from a broad area further north, build-up a small berm along the driveway, and shape a swale that will intercept drainage from as far as the county line and direct it around my house. Old Gilmer built himself a fine house, but he put it in the middle of a prairie drainage-way.

Here's how the hammer works. I lower the four teeth that are part of the box-blade, drop the blade to ground level, and drive the tractor toward the driveway. The teeth sink an inch or so into the ground, loosen the dirt, and the blade drags some of it along. I raise the blade somewhere near the driveway, go back to the borrow area and repeat...about ten-thousand times. After several hours work, here is what it looks like. 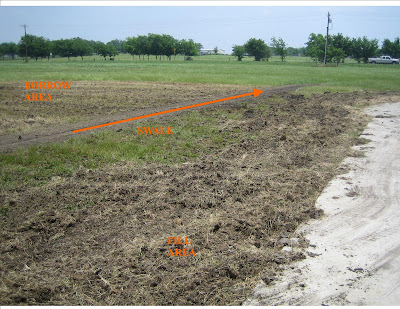 I think if I had an implement (plow? disk? good ol' common sense?) that would really help "till" the soil and get the vegetation out of the way. Four 3/4-inch teeth, an inch deep, is slow going. I didn't expect the box-blade to scrap the top layer of vegetation off, and it certainly didn't. Experience with the swale, where vegetation was removed, suggests I can move dirt much faster without vegetation. Maybe, you'd suggest, I could be more productive if I had some skills. Yep, fancier tools and a little know-how would be nice, but I don't have either.

So if you have any suggestions, I'd be happy to hear 'em. That is AFTER you've quite finished laughing AND chosen to omit any clever sarcastic comments that will no doubt come to mind.
Posted by Pondero at 12:22 PM