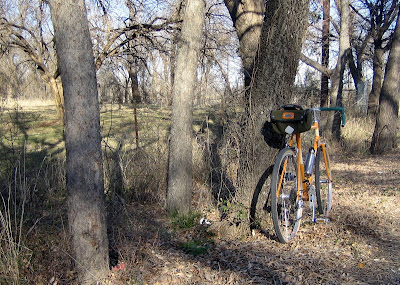 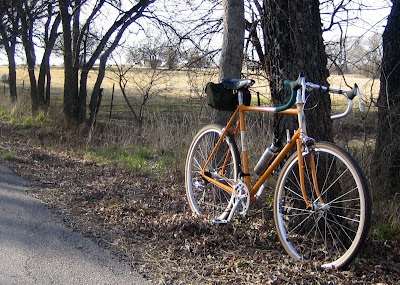 I'll fix the bar tape and provide a more detailed review (and photos) soon. Then we'll see if Homer will live up to his "epoch-making" promise.
Posted by Pondero at 5:01 PM 6 comments: 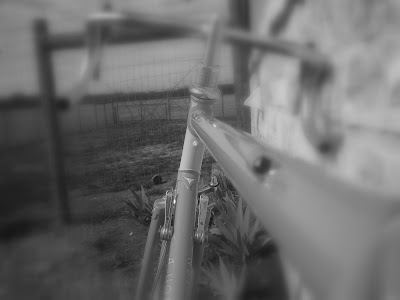 No matter that I've added the rear brake and rear derailleur. No matter that I told him that the remaining parts would be here Monday. No matter that only cables, chain, and bar tape remain and I promised to finish the build Monday night. He wasn't satisfied. The sun peaked through the clouds for a few minutes and Country Boy here nagged until he was outside in the fresh air. 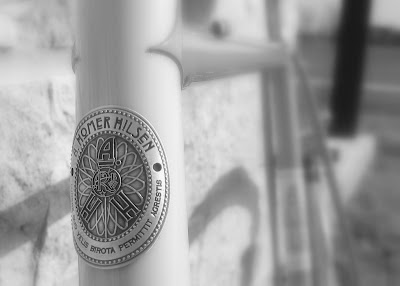 Great. That was just the kind of encouragement he needed. Now he will be a relentless nag as I attend to other things around the house. He wants to ramble down some county road so bad, he's straining at his fancy lugs. 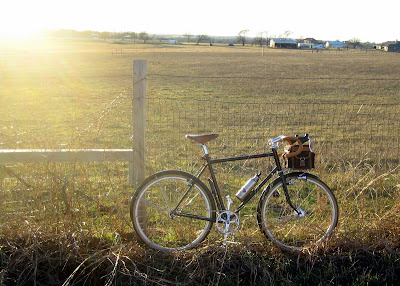 Well...as you might notice, this is NOT the project bike. This is the old bike, but there have been a few changes. The faithful Kogswell has sacrificed his saddle for the good of the project. The worn out bar tape has been replaced. There might be a few other refinements yet to come here, but this bike is, thankfully, in service.

The new frame is all but hurling verbal abuse. He is anxious to get on the road. Country bike that he is, living in Denton County, he is in his element. Well, if I'd hurry and finish-up, that is. Strictly speaking, hanging on a work stand in my living room is NOT the place for a country bike.

All I can say now is that the decisions have been made and last of the parts should arrive in a handful of days. Hopefully, they will all fit together well and not challenge my limited wrenching skills. If that happens, the country bike might just lose the last of his patience and give me an old fashioned whuppin'.
Posted by Pondero at 5:55 PM 3 comments: 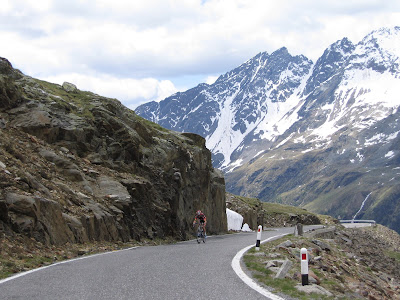 Pedaling uphill is immediately apparent. The sudden increase in effort is much more vivid to the cyclist than is the visual landscape. It has been said that one doesn't fully appreciate his topography until he bicycles across it. The same efficiency of motion that helps the cyclist move so easily across flat ground also aids Mr. Gravity as he tugs downward against more lofty causes. So climbing with the bicycle is far from incidental. It is absolutely deliberate. Put another way, if you are coasting, you aren't getting any higher.

The noble pursuit of Godliness compares favorably. He who seeks high character is not like one peering around a corner to see if it is there. Instead, he is like one fully immersed in effort, decidedly steering the bicycle up the slope. He desires a higher destination and invests personally in attaining it. He is completely aware of the concept of gliding easily on level ground, and moreover, the ability to turn back, coasting at great speed to the lower places. But with each pedal revolution, he climbs...

Why do we see cyclists in mountainous terrain? Are there no flat-ground places to ride? Of course there are. Cyclists climb mountains because they value the august grandeur of the pinnacle destination and they celebrate the very incremental and doable work that makes it possible.

Perhaps the same is true for the character builder. Perhaps he treasures the higher calling of holiness and delights in the daily discipline. Climbing, with focus and resolve, every ascending moment along the way. Not accidental. Not easy. Just infinitely rewarding.
Posted by Pondero at 9:57 PM 4 comments: 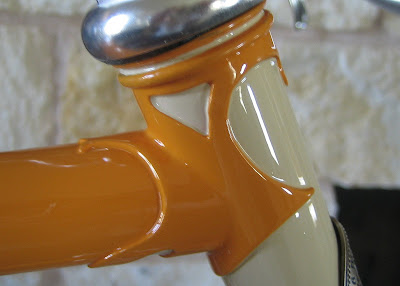 Mr. Impatient is still not satisfied. He doesn't have time for my puttering or my incompetencies.

I might argue that things have been happening, but they aren't really very visible. I might explain that a slower pace will allow me to get things just right and help me avoid slapping things together for the sake of just getting on the road. He should understand THAT.

In the end, I suppose what I've been doing is puttering around. As he'll tell you, it really is about time I make a few decisions, order a few last parts, and finish this project up.
Posted by Pondero at 4:20 PM No comments: 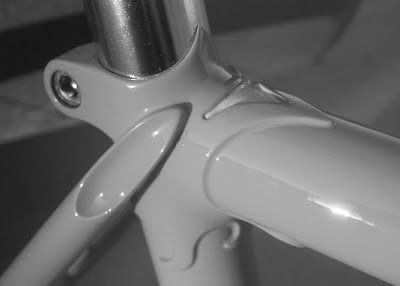 It leers at me with disdain. Obviously impatient, it wonders if I'm worthy...or whether I even know what I'm doing. It waits for attention, while I am otherwise occupied.

The project bike is a work in progress. Unfortunately, because I've been slammed with the flu, my body is also a work in progress. Still trying to regain strength, I struggle to catch up at work. Because I'm working with a budget, and trying to use parts from other bikes, there are still a few build issues to resolve.

The objective is a stable of two 650B bikes. One fixed and one with gears. I just need to tend to several details. But this new frame is a bit spirited and the constant taunting is starting to mess with my head.
Posted by Pondero at 8:48 PM 2 comments: