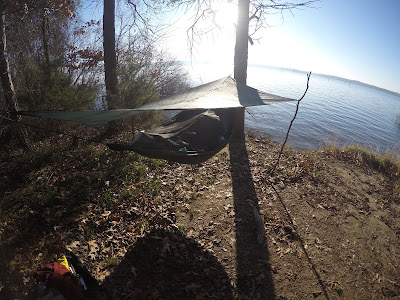 What is it that makes simple living so sweet?

Is it cutting out all the clutter, and focusing on the basic essentials?  Does it somehow create more time out of a chaotic life?  Maybe it has a way of tapping into, and sharpening, our senses.  Perhaps there is something about a connection with the natural and elemental.

A cheery and crackling campfire is a comfort on a chilly night outdoors.  It is warm, gives light, makes a pleasing sound, and delights the eyes.  It becomes a gathering point for people.

The daily routine of waking up is transformed when it happens outdoors in a beautiful place.  It is a completely different sensory experience.  Emerging from sleep in direct sunlight is like coming alive every day.  It can create a certain energetic eagerness to leap into life.

But simple living can also be raw.  Unpleasant weather is real, and winter nights are long.  Food, drink, and entertainment options are limited.  Sometimes the sweetness is the ability to find something positive to enjoy in the midst of otherwise bitter conditions.

For me, however, the sweetest part of simple living is that it...for my life so far...has been voluntary.
Posted by Pondero at 9:20 PM 1 comment: 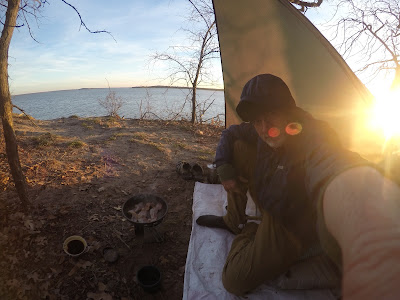 When I woke, the wind blew waves on the lake and whistled by the edges of my tarp.  It was as windy as predicted.  This most definitely wasn't the sound that invites one to leave a warm bed.  Conditions inside my open walled tarp configuration were actually quite still by comparison.  I was grateful to have my tarp oriented correctly, and to have a reasonably comfortable place to prepare breakfast.  I spent a lot of the morning contentedly under shelter. 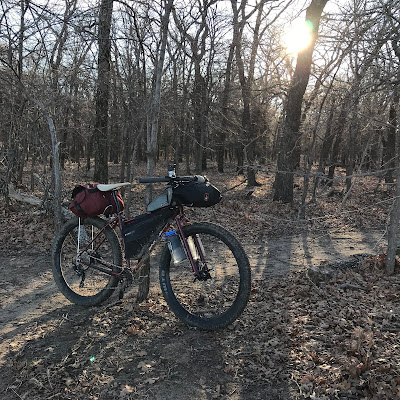 On the afternoon prior, I had driven to the State park, unloaded the bike, and headed into the woods.  The afternoon was spent crawling along looking for a campsite.  Due to my recent scouting trip, I had a couple of options in mind.  But which would be the best for the conditions?  With the full lunar eclipse on the calendar, lake side with an east view was "option a".  After a couple of hours of scouting and weighing options, "option a" won out.  The only concern was the high exposure to the strong wind mentioned in the weather forecast.  Trusting the predictions, I pointed my tarp point southeast, and nailed it. 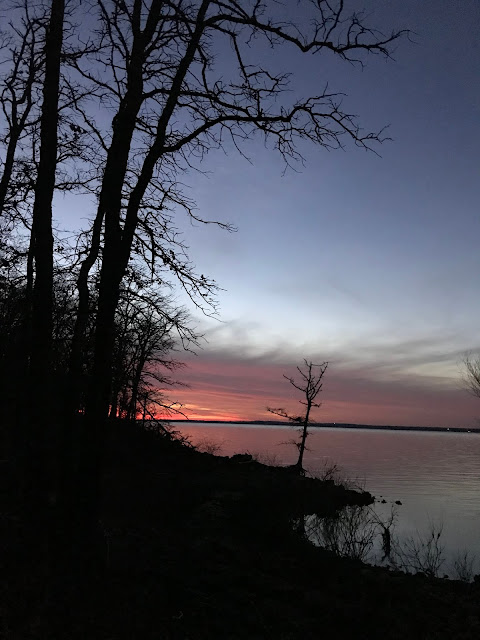 As the sunlight faded away, the woods turned darker, spookier...and colder.  Cooking my chili dinner had been scheduled for just this moment.  On one horizon there was disappearing red flame, and on the opposite horizon, a gold moon leap into the sky.  This is what some of us would call perfect dinner entertainment. 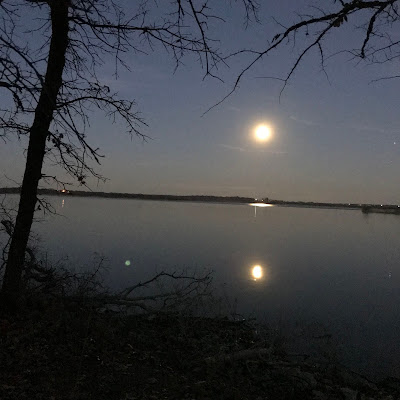 Most of the time, the lake looked like a black sheet of glass.  Where was the predicted wind?  Would it arrive later in the night?

I watched the moon rise into the sky, and lake surface ripples come and go.  With the activities of dinner completed, a lack of movement allowed a chill to seep in.  I crawled under my tarp, and inside my quilt.  Honestly, I missed a lot of the blood moon stuff.  I peeked out at one point to view a partial eclipse stage.  But lying down in a warm place, my relaxing body overtook me.  As if I were under some kind of magic spell, I was helpless. 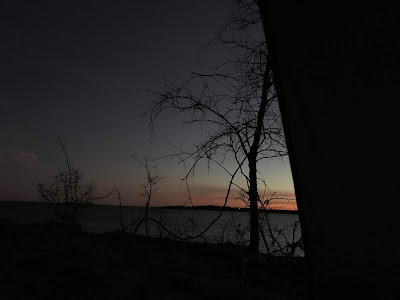 As usual, I was awake at first light.  The air had become rowdy during the night.  I recall waking up and being amazed that, even with an entire open side, I was protected from the raucous.  The view was both enormous, and somewhat immune to the elements. 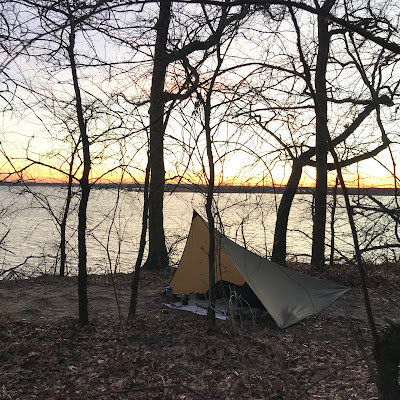 The real test would be preparing breakfast.  I was going to need to spend a significant amount of time brewing coffee, and frying bacon and eggs...and brewing a second cup of coffee, of course.  The original plan was to bring the bivy to this site.  But, after imagining spending my morning around camp with limited shelter, a tarp seemed like a better choice this time.  The ability to sit up, cook, store all the incidentals out of the wind, and still have a great view, truly was impressive. 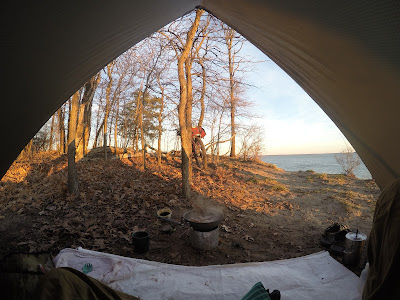 I could sit on my pillow and sleeping pad for comfort.  Everything needed was within reach.  So there was no rush sipping that second cup of coffee, and watching the early morning light evolve fully into day.  The tarp shelter was the last thing packed away.  All clean up chores were done behind its protection.  Eventually, however, even it was gone.  I was fully exposed, and it was time to pedal away from this place. 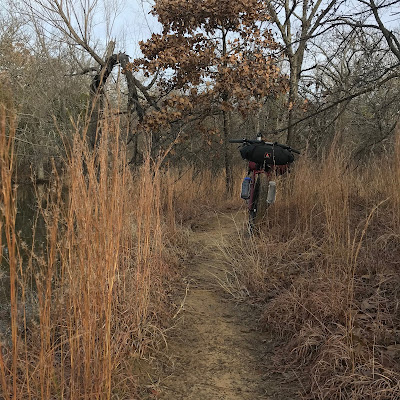 Deeper into the woods, the conditions were fine.  It was such a pretty day, and pedaling kept me warm.  So I crawled along at a strolling pace, and absorbed the beauty of Texas winter. 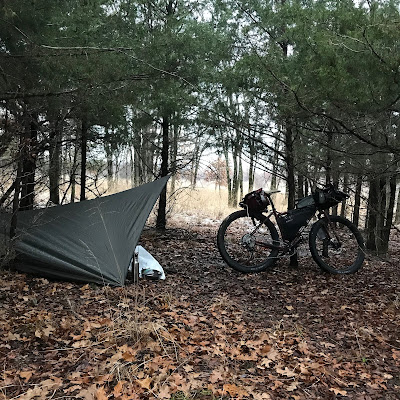 The weather wasn't ideal for a long ramble in the country.  It was wet, in the low 30s, a few odd snow flakes, and a sustained 25-30mph wind.  But, with so many outings thwarted by circumstances lately, I was determined to get outside.  I needed to find a way to work with what was given. 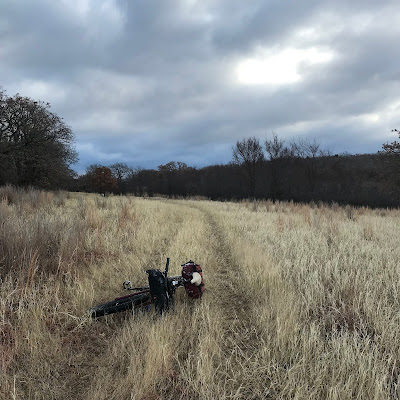 There is a spot in the woods, reasonably protected from a north wind.  It is in a State park, a short ride away from the parking lot.  Even with the brutal headwind and muddy conditions, it wasn't bad.  Patiently crawling along in a low gear works fine when dressed properly. 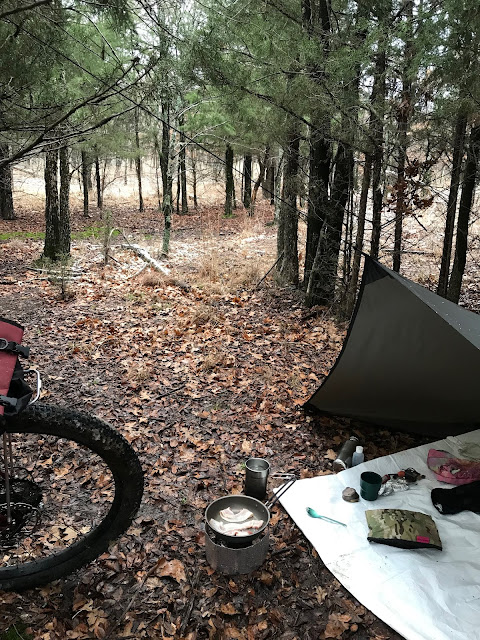 I found my sheltered spot, and added additional shelter in the form of a tarp.  This approach reduced the wind chill almost completely.  Some of the larger gusts seemed to swirl around the side of the tarp at times, but is was surprisingly comfortable.  This spot was pleasant enough to leisurely cook some bacon, and brew some fresh coffee.  I considered spreading out on my ground sheet for a short snooze, but conditions appeared to be improving.  Maybe I could get a longer ride in after all. 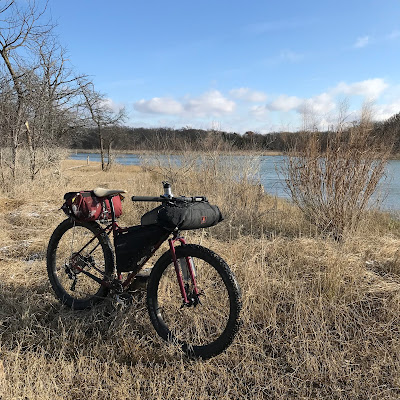 Mostly, I stayed on groomed fire roads.  I did, however, get on a few trails.  Strict trail nannies might have disapproved.  But the areas I rode were firm, and I was watchful (while creeping along) for any signs of damage.

So what was originally planned to be an experiment in finding a tolerable place outside to spend an hour, turned in to a second breakfast outdoors and a decent ride.  As a bonus, two excellent camp spots for future outings were found.  With a little good fortune, I'll be back in a few days to provide a report on one of them.
Posted by Pondero at 3:16 PM No comments:

A Nest of Refuge 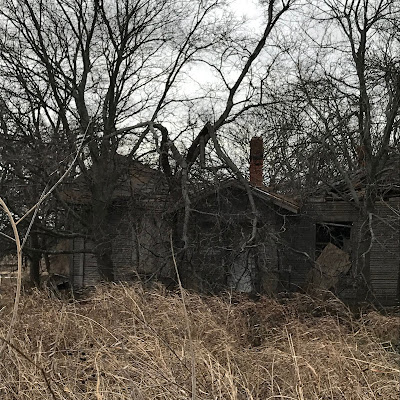 Lifeless trees and tall brown grass engulf an abandoned ranch house.  Enshrouded by a sky of textured grey, and cold like a granite tombstone. 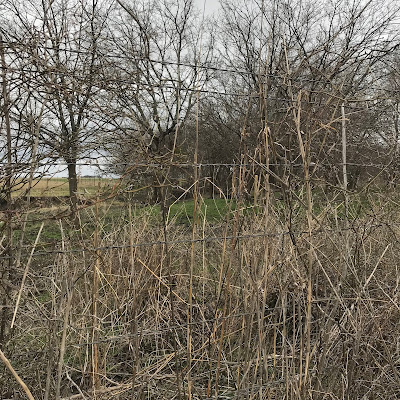 A cold, gusty wind whistles across the prairie, and views are sacrificed for shelter.  This tiny spot, squeezed between a barbed wire fence and a gravel road, is pleasant because it is a refuge. 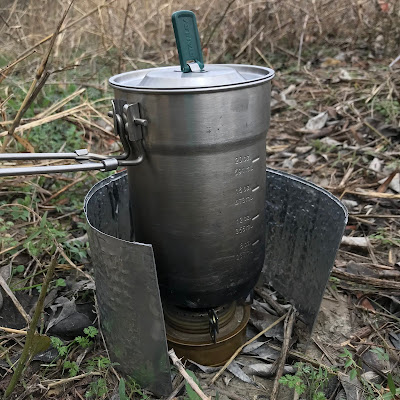 A stove doing its one simple job, warms me.  Even though invisible, the flame lifts my spirit like a campfire. 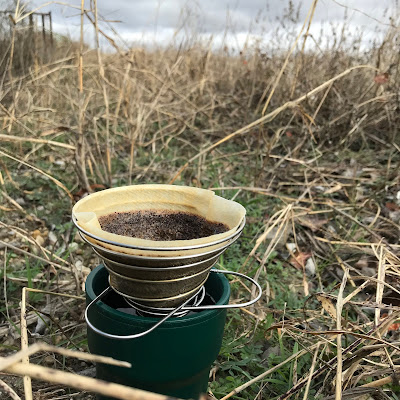 Burrowed down low, and surrounded by tall grasses, I settle, relaxing into the spot as if it were a nest. 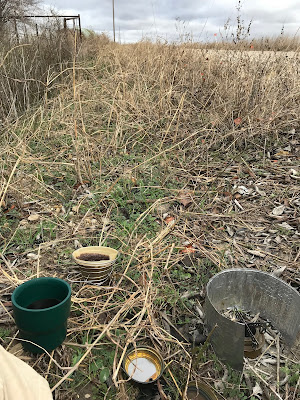 Peeking over the grass tops to the road, there is no activity.  Nothing passes by but wind, roaring in fury. 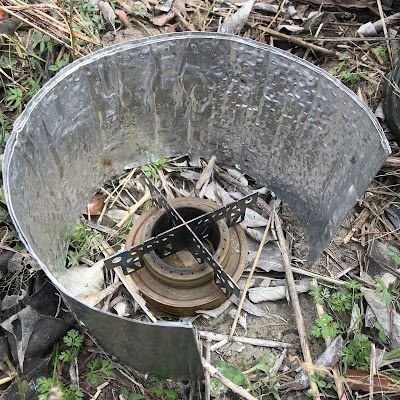 My coffee cup is held directly above the stove.  The invisible flame warms my hands, as the coffee warms inside.  For a few minutes, this desolate place is a cheery, warm cabin.  Then both fuels are consumed, and I am left shrouded in grey with nothing but wind. 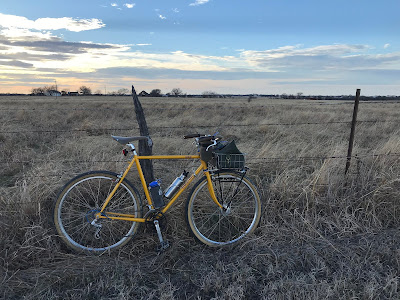 It's funny how wild imaginations of grand adventure can sometimes interfere with so much opportunity that is already in our hands.  As soon as we see what others in other places are doing, we think perhaps they are living a life more fulfilling than our own.  Their videos and photographs are compelling.  Their stories sound so enticing.  So we seek those experiences for ourselves.  We imagine visiting the places they've been, seeing the vistas, riding the routes, camping in wild places, and overcoming the challenges.  We'll come back with our own amazing stories, we say.  We lay aside what we previously held as precious so we can pursue the vision in our imagination.

We prepare, and we plan.  Our current gear will not suffice.  The grand adventures of our imagination require bicycles, camping gear, clothing, and what-nots that are not required for our local pleasures.  So we sell off a few things to help fund and equip this rare objective.  We are unfamiliar with those distant places, and spend our free time reading travel accounts, learning new skills, and scrutinizing maps.  The logistics required to make the most of what the imagination promises takes significant time.  It is time invested well, we say.  Look at what we'll be able to do!  Those hours of free time once used for local exploration, and making homegrown adventures is lost to something beyond.  Suddenly, we find ourselves unprepared and unable to do what once came so naturally, and brought so much joy.

Sometimes our lofty dreams create a context that is unrealistic and intangible.  Most of us do not have the gumption to completely upend our lives.  Those who do, will create a new context.  For the rest of us, maybe we should not lose sight of our current sense of our place, our current commitments, and how we live our lives.  We should think, perhaps, in terms of anchoring our bicycle adventures within the practical limits of our situation.  The wisest investment is there.  If those grand adventures come our way, so much the better.  But let us never let go of the precious gifts that we already have for those temporal, unsustainable visions...how ever enticing. 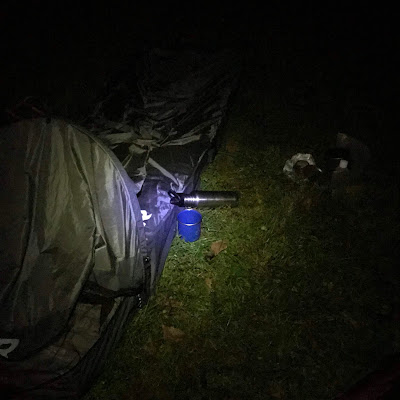 My reason for the bicycle has come full circle.  As best I can remember, the beginning was all about play.  The bicycle took the natural freedom of the outdoors and magnified it tremendously.  Even in my teen years, it was a sort of escape from the chaos of life into the quieter places outside.

As an adult, I wandered into a more commonly recognized reason for adults on a bicycle.  For years, I pursued athletic achievements.  I worked on going faster and longer, and monitored my performance improvements.  I dabbled in racing to test my abilities against others.  I trained.  In the winter, I trained indoors, staring at walls as sweat poured off onto the floor.  The bicycle was about sport and accomplishment.  Seeing the progress was addictive, and exploring and expanding personal limits was the goal.  It was a goal that required focus, energy, dedication, and commitment.  It had become work.

Somehow, life steered me back.  Maybe it was family needs, spiritual insight, or simply an aging body.  But I had found my limit.  I simply didn't want to work at cycling any longer.  It was sad and frightening to think about letting go of something that had consumed an investment of so much time and energy.  I figured something very precious to me was lost.  Then, without consciously thinking about it, I climbed on a bicycle and rode circles in front of my house.

I rode slow, meandering, circles just to be outside.  It was a kind of meditative movement.  Without realizing why, a sense of freedom began to grow.  I had escaped from the chaos of not only life, but achievement cycling.  It was about play again, and it was about seeking those quieter places outside.  It happened more than ten years ago.

These days, it most definitely isn't work.  Often the bicycle is for camping, exploring, picnics, or a cup of coffee.  Always, it is to be outside.
Posted by Pondero at 1:06 PM No comments: