A Ride with Friends

The Saturday morning ride included a couple of extra special aspects today. First, good friend, Terry England, came out to my house to join in on the fun. Terry is a spiritually-minded man and has a family we've come to love in our short time up in north Texas. The second thing that made the ride special was a surprise invitation. More on that in a moment.

Terry came by around 7:00 am and the plan was to ride the 13-mile loop. We figured on a conversational pace and it worked out nicely. I kept pestering him with questions so he'd be forced to talk (instead of pedal fast) and maintain a comfortable pace for me. 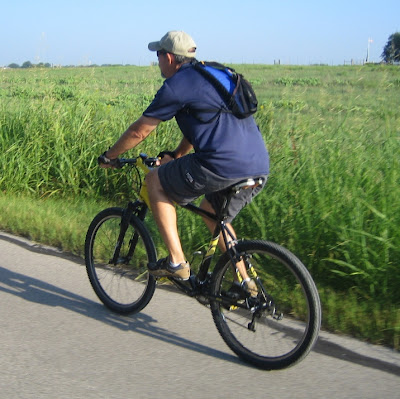 The other thing that helped me out, this hot and still summer morning, was that Terry was riding a mountain bike. While his bike is a very nice one and well-maintained, I think my higher pressure tires and lack of suspension might have helped me a little on those paved roads.

Just before turning back, we decided to extend the ride slightly and do a short out-and-back on Sam Bass Road. We rode down to where a new bridge was being constructed to (presumably) replace one that was washed-out or damaged by Clear Creek in the early summer rains. On the way back out of the creek valley, we climbed up the road to where a man with a white pick-up truck with an unusual contraption in the back was parked at a pasture gate. Upon closer examination, the contraption began to look more like a two-wheeled horse cart. I pointed and turned to Terry and said, "Janet would love to ride that cart!"

"Go get her and bring her back," the man replied, "and I'll give her a ride."

So I did. After hearing how much fun she had on her last cart ride, I knew this is the kind of invitation we should take advantage of. She seemed comfortable and looked like an expert from the beginning. 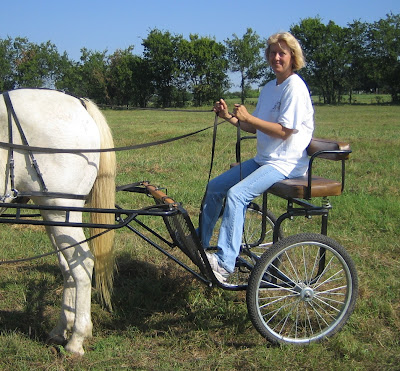 Within minutes, the man had her driving the thing all over the pasture. The horse, Sparky, has an interesting story. Due to being blind enough to walk into fences, his life was almost ended. However, since he is so gentle, he was given a chance at cart pulling work. The owner explained because of Sparky's blindness, he has no trouble trusting the cart driver and readily follows instructions. Today I was able to ride with three friends. My very best friend, Janet; my new friend, Terry; and a gentle, blind horse named Sparky. 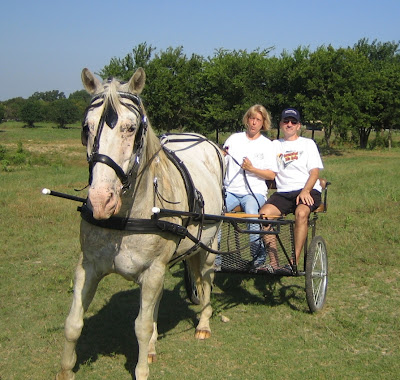