I just finished reading a book. I was so impressed that I thought it should be mentioned here. The purpose of the book, to refute objections to christianity, doesn't apply to me. I am a christian. I almost didn't read it.

I picked it up out of curiosity and was surprised at the simplicity and organization. The authors begin with reasoning and science to make their initial points and build on that evidence, layer upon layer, until atheism appears impractical and unbelievable. Thus the title, "I Don't Have Enough Faith to be an Atheist". 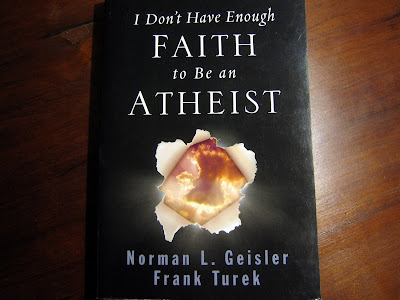 They go beyond the mere establishment of the existence of God to making the case for christianity as described in the Bible. I thought it was compelling. These guys bring up every objection that I have ever raised myself or heard uttered by others. Then they overwhelmingly refute them.

You might point out that my reaction is predictable for someone already convinced. I agree. When it comes to the Bible, I'm biased. To my mind, there is plenty of evidence in the world around me and the words of the Bible alone to be convincing.

The thing that haunts me, however, is that I was so totally convinced that I can not imagine that anyone could read the book honestly and formulate a substantive argument. I'll admit that I might be limited in my perspective in this case, but I'd really be interested in hearing a alternative view of the information presented. Can a reasonable argument be made?

Finally, I wonder if those that aren't convinced about the existence of the God of the Bible will read this book and investigate. If not, then one of the central messages of the authors seems to apply. Lingering doubt or scepticism is not a matter of evidence, it is a matter of will.
Posted by Pondero at 8:17 PM