Bicycles are great machines and can take one to far away and exciting destinations. As one cyclist (Kent Peterson) so eloquently said, "Any distance is biking distance". I am planning my own multi-day bicycle trip and am looking forward to the adventure of riding through different surroundings. When that happens, it will be the longest point-to-point bike ride I've ever done. Until then, I am content with little adventures closer to home.

Today was one of those adventures. The destination was 2.5 miles from home at the cross roads of FM 2450 and FM 455, the old township site of Bolivar. Having a little more time than it takes to ride a bike 2.5 miles, I took the long way. It was a crisp 37 degrees and the sunlight was just beginning to creep over the hills and trees. 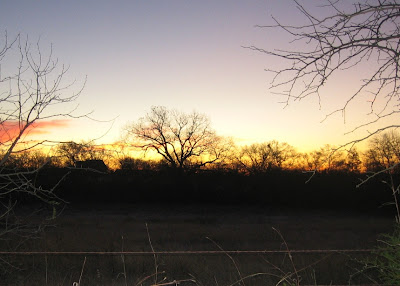 It was a delightful morning and there was no hurry...just spinning along the backroads...getting there whenever we get there. 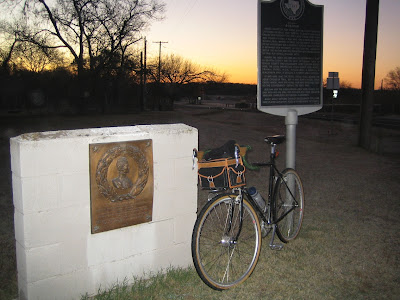 Upon arriving at the intersection I've been through many times, this time was a completely new experience. This time included a history lesson. Turns out that Bolivar was almost named New Prospect if it weren't for a few mugs of rum. 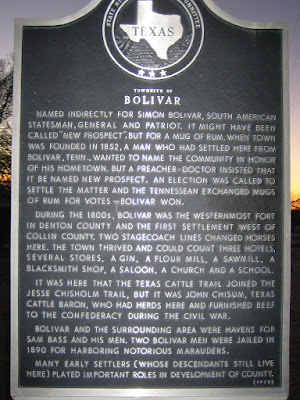 Turns out that the town was named for another town in Tennesse, which was named for Simon Bolivar. Mr. Bolivar as best I can tell from the monument given to Texas by Venezuela, was a fairly productive guy. Apparently, he died at age 47, but look at his resume. Statesman. General. Patriot. Liberator of Venezuela, Columbia, Ecuador, Peru, and Panama. Founder of Bolivia. Not only were two American towns named after him, an entire country was too. 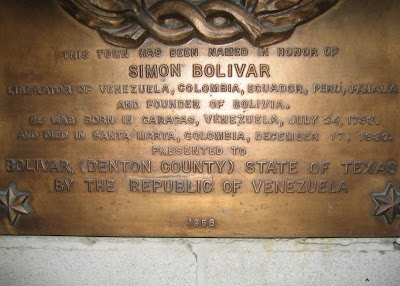 Apparently, back in 1958, the Venezuelan government decided to send us Denton County residents a small momento so that we could remember Mr. Bolivar. That is what we did today. We remembered for the very first time that a man who did so much they named a town in Tennesse after him. Because another man moved to Texas and wanted to name this little town after his home, he went to great trouble and expense to buy mugs of rum as a part of his campaign strategy...and when the votes were tallied, this place would be called Bolivar...and it still is to this very day.

Unfortunately, Miss Becky doesn't live here anymore. Some of you might remember my entry about Miss Becky and how certain persons-of-conscience thought maybe she should be "rescued". So she was. It is interesting to know about the affects of mugs of rum and how it came to be that we aren't standing in a place called New Prospect. Even so, and as delightful as riding a bike on a clear crisp early morning little adventure can be, traveling through Bolivar isn't quite as interesting as it was a few weeks ago.
Posted by Pondero at 6:50 PM