I am very proud to have my first guest blog from my daughter, Lisa (SN Johnson of the United States Coast Guard). Through the marvels of modern technology, I have been able to receive this from her during an active patrol somewhere off the west coast of Central America. I know you will enjoy it and you will quickly learn that her job is nothing like your last vacation cruise. How about some well wishes to her and all her buddies on USCGC Sherman serving our country!

I have decided that my first blog entry will simply catch readers up on what has been going on this patrol. I understand not everyone speaks the jargon of the Coast Guard so if there is an unfamiliar word, check the footnotes at the bottom for Lisa's Amazing Coast Guard Dictionary. We are almost halfway through this patrol and many of you don't know anything about what goes on while underway(1) on a Coast Guard Cutter(2).

Welcome aboard Coast Guard Cutter Sherman (WHEC-720)(3). This vessel is one of the largest boats in the Coast Guard Fleet. From bow to stern it measures 378 feet. 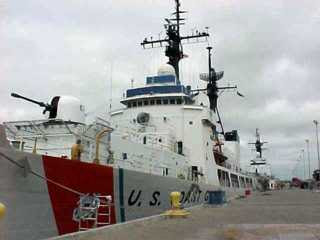 We left our homeport of Alameda, CA on June 19th and set sail south. Within a few days of being underway we hear the pipe(4) that is everyone's worst nightmare underway. "Now fire, fire, fire. A class Alpha(5) fire has been reported in the incinerator room(6)." If you were at work and a fire alarm went off you would evacuate the building and call the fire department. When I'm at work, I am the fire department. We frequently spend time training everyone onboard in basic and advanced damage control skills. 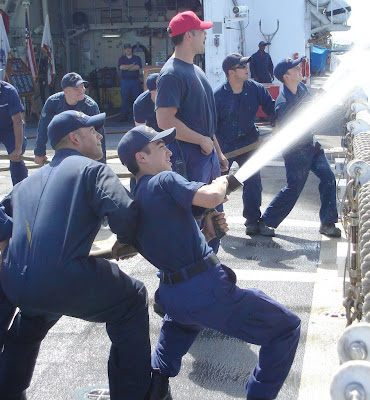 The fire was out in minutes and the workday continued.

A couple of days later, I was laying in my rack(7) at about 0100(8). I had just gotten off of work and was drifting off to sleep. Suddenly the absolute worst pipe came over the 1MC(9). "Now fire, fire, fire. A Class Bravo(10) fire has been reported outboard the number 2 main diesel engine." If there is anywhere you don't want a fire, it's the engine room. Within 3 minutes the entire boat was awake, dressed and ready to fight a fire. Luckily it was put out quickly by the security watch stander.

A couple of days after this I woke up at 0520 and went the head(11) to wash my face and brush my teeth. I push the faucet down to start the flow of water and nothing comes out. Being very groggy I tried this a few more times, with no success. "What happened to the water?" I managed to slur out to one of my 13 roommates. "Evap(12) is broken again, or maybe it's the pumps, I'm not exactly sure all I know is messdeck gossip(13). Anyways, we have no water at all." Being a cook this does not work well for me...

Imagine cooking thanksgiving dinner and cleaning up afterwards after you forgot to pay your water bill and all water is shut off in your house. With 5 cooks working tirelessly we managed to get 3 meals out for 170 people that day and clean up using bottled water and sea water. The cooking was tough, but surprisingly, the clean up was a blast.

After working for 4 hours in a hot galley (the temperature gets up to 105 degrees sometimes) then standing in front of a steam line serving a hot and sweaty, grumbling crew for an hour an enormous pile of dishes is hardly encouraging. Senior(14) had us scrape as much food off the dishes as we could and then we took them out to the fantail(15). We had 5 buckets of sea water, soap, chlorine, and bleach set up to scrub and sanitize the dishes. It was pouring rain outside. By the time we got done scrubbing, we looked as if we had just climbed out of the ocean. At least we were finally cool.

Saturday was our first port call(16). It was an unscheduled event, but very good for the moral of the crew. Every time I visit a new place I put it on a list I have. The list is places I would wanted to retire and places I definitely want to avoid when I retire. El Salvador is a place I will not retire to.

Today we got our second helo(17). Most of the crew is skeptical that we will get any drugs this patrol. Our last two patrols we were very successful and it is hard to imagine 3 successful patrols in a row. This pessimism makes getting a helo just an annoyance for most. Nothing is more irritating for the sleep deprived crew than to hear "Flight Quarters, Flight Quarters," piped over the 1MC in the early hours of the morning. It always seems like go fasts(18) only work at 2 in the morning. Why don't those drug runners work a 9-5? 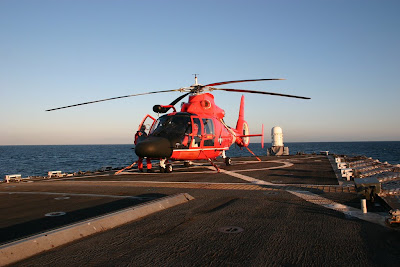 Those are some of the highlights of the first half of the patrol. Look for my next blog soon... "an average day in the life of a lowly sailor"

4. Pipe - announcement made over the 1MC for the information of all hands

5. Class alpha fire - fire caused by the burning of normal materials, such as trash.

6. Incinerator room - Room where all trash burning takes place. We sort trash while underway, the garbage men have a hard time making it out to the pacific ocean. Plastic gets burned and food, paper, glass, and metal get thrown overboard.

7. Rack - a ridiculously small bed that sentences you to a lifetime of visiting a chiropractor. To any normal person, it is a terrible place to sleep. To those of us onboard, after a long day you want to be nowhere else but curled up in your rack.

10. Class Bravo Fire - fire caused by the burning of oil or fuel

13. Messdeck Gossip - any non reliable information, generally heard on the messdeck. People often try to start outrageous rumors just to see how many people they can get to believe them.

14. Senior - Short for Senior Chief, not a guy you want to mess with, he can make you have a very bad day if he wants to

15. Fantail - Deck on the back of the boat. Much of the crew hangs out here to smoke.

16. Port Call - Liberty being granted in a foreign port. Makes the crew very happy to get off the boat.