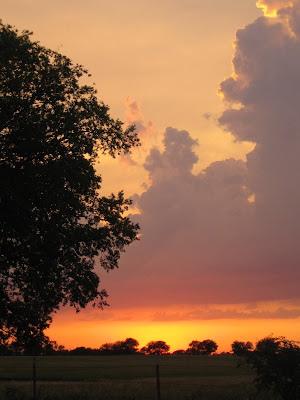 The sky looked like this. In keeping with the new ride schedule, I had waited until sundown to head out for an evening cruise.
Up ahead, I saw the rancher park his truck on the left side of the road, and walk across to set his trash out for pickup on the right side. He turned immediately to walk back to his truck, but looked my direction and stopped. There was a slightly uncomfortable moment for me as he stood there, apparently waiting for me to arrive, or pass by. But why?
When I came near, he smiled, pointed to the front of my bike, and exclaimed, "That...is one...bright...light!" What was at first slightly uncomfortable, became handshakes, introductions, and neighbors talking in the middle of the road at twilight. Our conversation covered pasture, fences, creeks, and cows. It dabbled a little while on bicycle lights. He told me about having a bike when he was a kid that had a bottle generator.
He filled in the details of my approach from his perspective. When he turned to cross back to his truck, he saw the light and thought I was riding a motorcycle. Of course, since I was on a bike, he had plenty of time to cross the road in front of me. He realized I was going a little slow for a motorized vehicle, but even then he wasn't thinking about speed. He said, "At first, I thought that was the quietest motorcycle I've ever seen!" When he finally realized that it was a bicycle approaching, he knew that he'd been fooled. Fooled by the Edelux before it was even dark.
As we parted, he complimented my light again. Nice neighbor.
Nice light.
Posted by Pondero at 7:32 AM