A Tale of Two Bike Rides

There were two rides on Sunday. They were very different in many ways, but they were both great. The first ride was short, slow, solo, and quiet. It was primarily a trip to church on Sunday morning. Because the streets were wet and I do not currently have fenders installed, the going was very slow to minimize the throwing of water from the wheels to my nice clothes. Not many people were out and about, but the birds recognized a glorious spring day and were already singing for joy. At the park, I paused and pulled out my thermos of hot coffee. At a picnic table near a soccer field, I sipped the coffee and watched the birds and squirrels. It was amusing to see the people walking or jogging with friends or their dogs. Several were wearing headphones. I would be surprised if what they heard was as nice as the natural sounds in the park early in the morning. There was no camera to document the first ride, but it was great preparation for the worship of God that followed. Even with the coffee break, the first ride only lasted about 40 minutes.

The second ride was longer, faster, included company, and occurred in the busy afternoon. After lunch, my longtime cycling buddy, Scott, joined me for a ride. The ride to Scott’s house is not far, but I left an hour before our scheduled meeting time and took the long way. The long way included going through the same park I visited in the early morning. This time it was filled with people and soccer games and picnics in the spring sunshine. 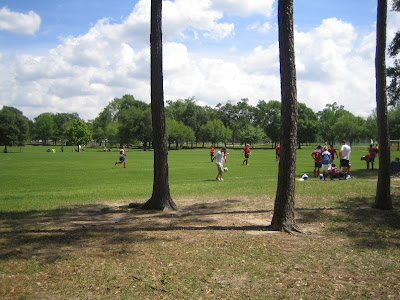 When I arrived a little early, he wasn’t quite ready to go, but his daughter was there to greet me. 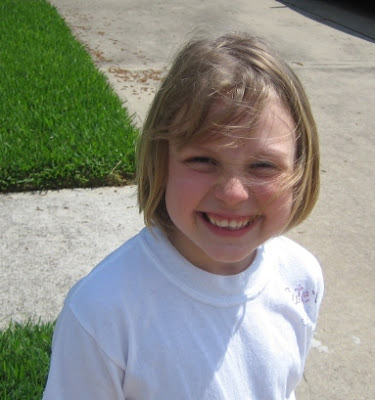 We rode together for the first time in several months and it was great to be back on bikes as a twosome again. It was warm, sunny, and we saw many other people out on bikes during our ride. 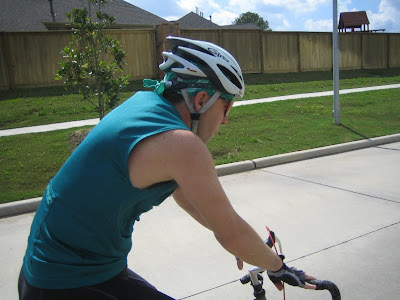 We didn’t ride fast as compared to our serious training rides of prior years, but with cycling clothes, less luggage, and no wet street worries, it was notably faster than the morning meander to church. There was enough speed and time in the saddle so that after arriving back at camp 3 hours later, my legs were ready for a rest.

I am learning how to treasure any kind of bike ride…and that’s a good thing.
Posted by Pondero at 4:41 PM