Going On A Cruise

At a business lunch this week, the two other gentlemen in the party revealed that they each had plans to take a cruise this year. One will be leaving for Alaska soon. The other will be flying to Spain to begin a Mediterranean cruise in September. They spoke of prior cruise vacations. They spoke of the places they'd see and the things they'd do. They spoke of travel logistics. They contrasted the two eagerly anticipated trips to exotic locations. I couldn't add much to the conversation. At one point, one of the gentlemen turned to me and asked, "Chris, have you ever been on a cruise?"

"No", I said, "but I hear they can be quite pleasant." Then I think I mumbled something about there being plenty of food. He turned back to resume his conversation with someone who knew of which he spoke. I took another bite of my lunch and listened.

This morning, while the birds were singing at peak volume, I opened the back door, let in the cool, morning air, and the coffee finished brewing. I pulled a small, familiar cup from the cabinet. When the coffee flowed slowly from the decanter, aromatic steam rose up and filled the space bounded by face, cup, and decanter. The hot brown liquid swirled...and then settled, but the fragrance continued to rise up and stir the senses. Pleasant, earthy contentment. Then, there was a realization. Perhaps, during that lunch meeting, I mis-spoke. 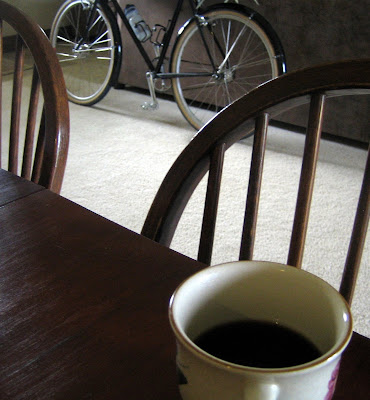 Actually, I've been on thousands of cruises. In fact, this old saddletramp has another land cruise planned very, very soon...and the anticipation gives me great joy.
Posted by Pondero at 7:39 AM