After all that riding on gravel yesterday, a little clean-up was in order for the Kogswell P/R. Since the wheels and major accessories came off to aid the washing, it was a good time to build it back up with gears...merely for the sake of variety.

At my request, Anthony (Longleaf Bicycles) built me a spare rear wheel with a 7-speed cassette to use with my single 48t chainring. My main objective was to allow for a simple and fast switch between a fixed gear bike and a geared bike. There might be a number of practical excuses one could cite for this behaviour, but let's just be honest. I did it because I can. 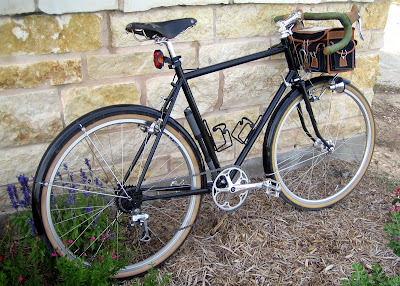 It doesn't take long to remove the rear wheel and chain, and replace them with another wheel, rear derailleur, downtube shifter, a single cable, and a longer chain. All the alternative identity parts are stored together so a change can occur almost as fast as the "need" arises, like Clark Kent donning the Superman suit. 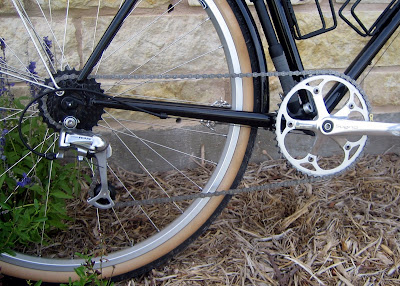 The simplicity of the fixed gear drive train strikes a personal chord, so that is the default configuration. But today, I WANT to fiddle with the downtube shifter and think about which gears to use climbing certain inclines. I WANT to have the ability to take advantage of higher speeds with tailwinds, spinning a smaller gear against headwinds, and coasting down hills. So for now, I'll live with a little complexity.