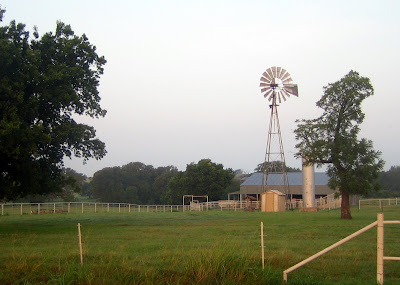 About 2 miles west of Valley View, Texas, at a nice, neat place that looked like this, the sun came up over the horizon. The air began to stir, and this windmill began creaking into motion. But this is not the beginning. It took a little while to get here.

With an early start, there was time enough for a two-hour excursion before preparing for Sunday worship. There was just enough time to check one of the new routes I had in mind. Heading north into the dark, I could just see the eastern sky begin to lighten. With my generator hub and front headlight, I navigated easily over familiar roads. I knew there would be plenty of light by the time I reached the new roads. Good thing. Within minutes into new territory, I was on gravel.

In the early morning light, I could see thin fog layers. The rolling terrain took me above, through, and below the fog layer at times. When dropping at speed into a fog layer, my bare arms actually felt a slight wet chill...a preview of the approaching fall, still weeks away.

The gravel road slowed me down. Due to the constraints of time, it was necessary to quicken the pace. Making up for lost time, I expertly guided my machine across the loose, but smooth, surface. Dust flew behind and I imagined racing across the cobbles at Paris-Roubaix. I was uncatchable...at least until I encountered a short stretch of true cobbles. 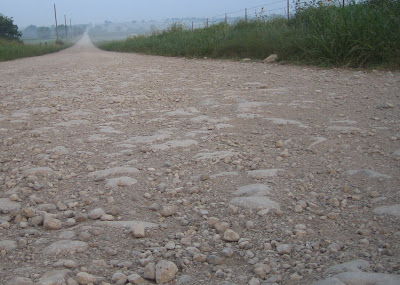 These larger stones were embedded in the dirt road and appears somewhat like the photos I've seen of the cobbles on that legendary race course. My machine and I were tossed laterally. We were bucked by some unseen Texas bronco and this more realistic Paris-Roubaix surface sucked speed, nerve, and pride right out of me. I soon realized that the only thing I have in common with those hardmen of the spring classics is the shaking of skinny arm muscles as the bike bounces its way along the roadway. Other than that, no comparison.

Thankfully, I only had a short run on the cobbles and even the gravel road soon transitioned into smooth asphalt...which brings us back to the west side of Valley View, Texas. Coming into town, the sun was blocked by leafy branches of a large tree, but the golden reflection off the road looked like a warm welcome for a humbled visitor. 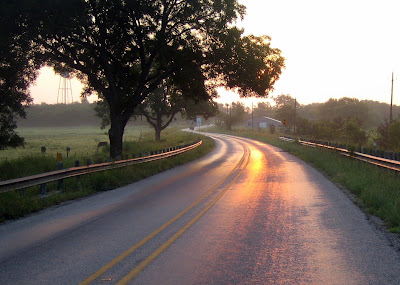 I climbed up into town, turned the corner, and rolled down the middle of a still sleepy Main Street. By now, the south breeze spun the windmill steadily. I put my hands on the drops, lowered my head, and pedaled into the wind toward home.
Posted by Pondero at 5:33 PM