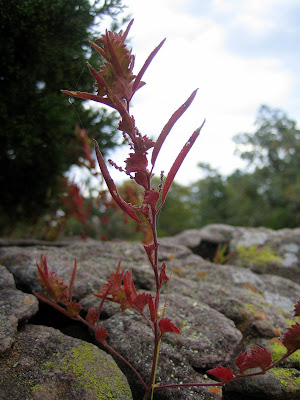 In addition to being my (unbelievably) fourth-in-a-row weekend of camping, it was also my longest overnight trip by bicycle. In some ways, it was a trip of contrasts. On one hand, my traveling partner, Chandra (GreenComotion), was pleasant company. On the other hand, the threatening weather turned out to be more than just idle threats. 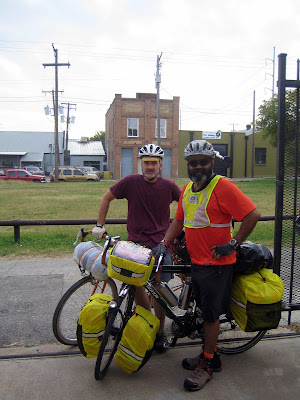 It all started out well under overcast skies. Two friends out for a small adventure of what ever the day might bring. 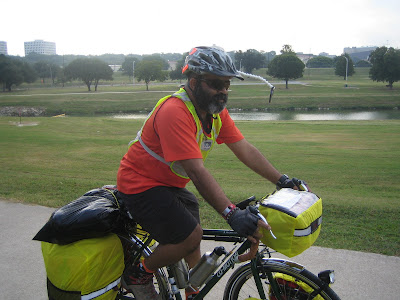 It brought calm easy pedaling down the Trinity Trails toward the southwest. Here Chandra anticipates the trip with confidence, prepared for almost anything. 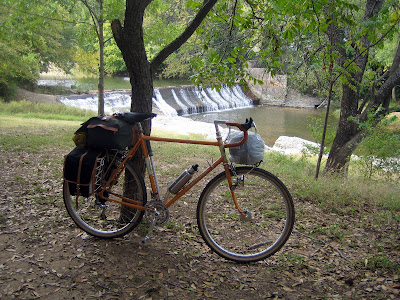 Not really weary yet, but the scene was inviting. Decidedly not in a hurry, we paused to soak it in. 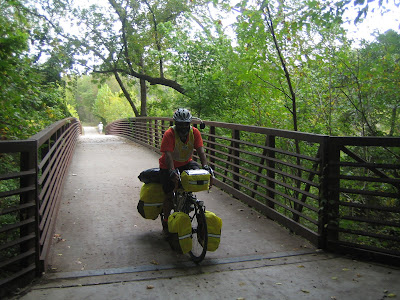 Before too long, we began to see signs of those early morning clouds burning off, and the sunlight erased the thoughts of the stormy forecast from our minds. 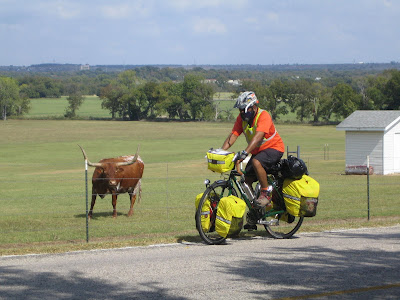 Somewhere between before reaching Aledo, the sun shone brighter, the temperatures climbed, and Chandra began thinking he didn't really need quite everything he had packed. Even the longhorn was a little concerned. 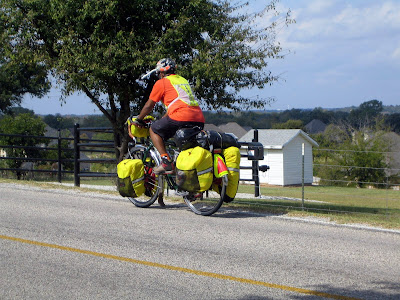 But bicycle touring is an elegant endeavor, and Chandra had a nice flow going... 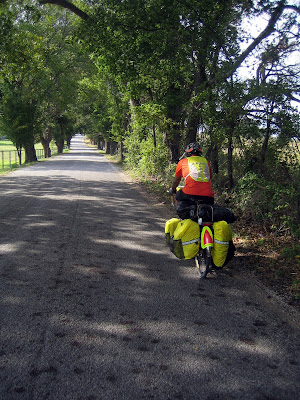 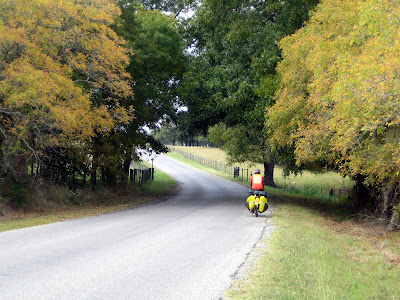 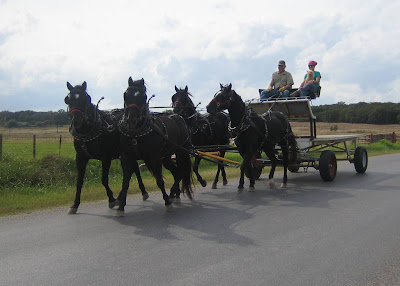 These folks had a nice flow going as well, and it appears they had more cargo capacity than they needed. 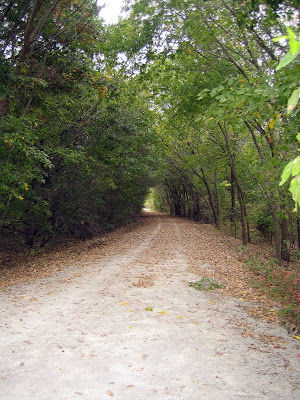 We both eagerly anticipated the Weatherford to Mineral Wells Trailway. The quiet, the colors, and the occasional wildlife sightings kept us alert for what we might see around the next bend. 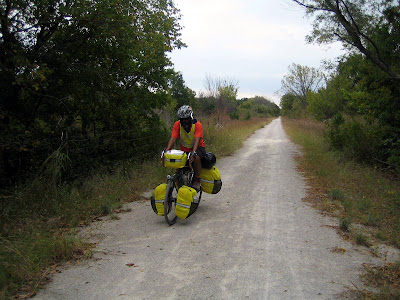 By this time, I believe Chandra was thinking about which items he could live without on the next outing. 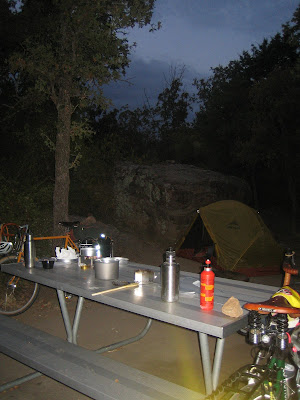 Even with the returning clouds, we saw a few stars, and the full moon gave us a little light at dinner time. Figuring we had our camp all set-up, a little rain during the night shouldn't be a big problem. 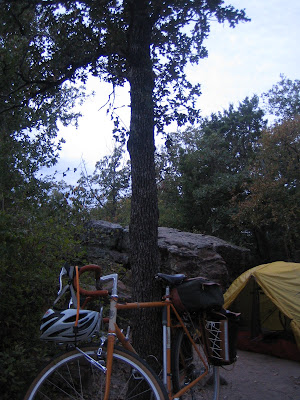 As it turned out, no rain appeared during the night. The sleeping was quiet and restful. 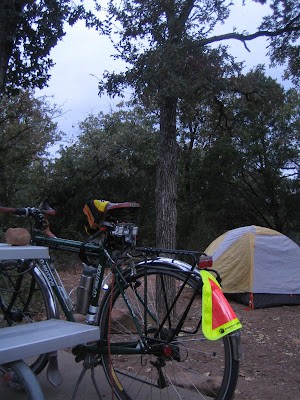 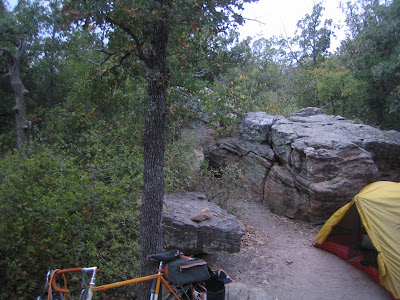 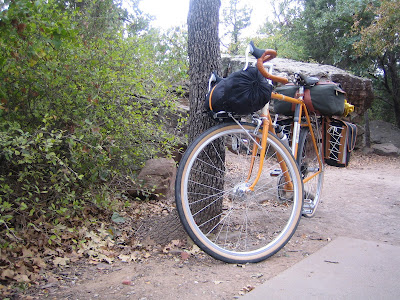 We didn't linger too long before packing up to go. Chandra needed to make decisions about some of his excess gear and how it might affect his plans to continue his tour. He'd either get the park HQ to hold some of his gear and continue to Granbury, or he'd call for a ride back home. Either way, I'd be riding back toward Fort Worth alone this time. After having his excellent company, I was a little sorry to leave Chandra behind, but a storm was coming and I thought I'd race it to Fort Worth. 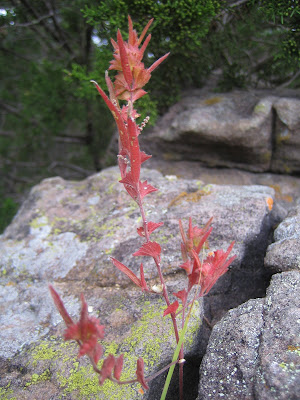 ...and that's where the photo documentation of this story ends.
I rode pretty hard all the way through Weatherford with only occasional drizzle. But when I reached the east side of town, an ocean fell out of the sky. After finding shelter and informing Mrs. Pondero that I was fine, and was planning to resume my trip after "this little storm blows over", the wind blew about 40mph and the shivering began. During that brief pause to brace against the wind, my sweet bride told me about the size of the storm on the weather radar, and insisted in coming to fetch me. Because I've learned that it is not wise to cross Mrs. Pondero, I decided being rescued is not a bad thing.
Thanks to Trinity Bicycles for allowing us to use their shop as a meet-up place, and thanks to Chandra, who I can honestly say pedaled a huge load all day, but remained pleasant company through it all.
Posted by Pondero at 6:43 AM