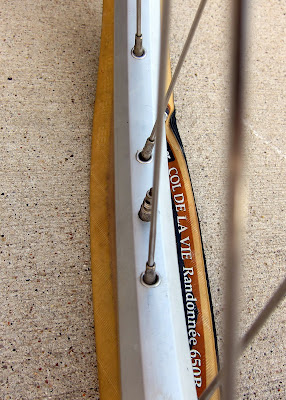 When it was time to load up the bike and drive home, I figured out why the last few miles of Saturday's ride were really wearing on me (in addition to the heat, and time in the saddle). I had decided to ride to my brother's house in Colleyville for some good ol' fashioned family time. Mrs. Pondero followed in a motor vehicle, allowing me a one-way bike trip (which was plenty today, thank you). But a flat tire doesn't really directly relate to my title for today's post.
Actually, I must make a confession. For all my righteous proclamations about not being a slave to training, the racing mindset, and speed, yesterday I faltered. Somewhere between Denton and Roanoke, on US 377, I let my mind lapse back to those days when I had some semblance of fitness. On US 377, there are a healthy number of roadies and tri-geeks all kitted-up. They are (mostly) lean and fast(er than me). Back in the day, I enjoyed the challenge of spotting a rabbit down the road. Each one was a bridge-to-breakaway situation, and I relished the opportunity to drop a cog or two and turn on the speed. When I saw a couple of riders ahead, that weren't pulling away from me very fast, the old fire was ignited (or maybe it was just the Texas sun).
I gave chase. Riding the Kogswell P/R, with cushy 650b tires at 45psi, fixed wheel drive train, and characteristically un-aerodynamic boxy Berthoud front bag (full of coffee, water, and snacks), I gave chase. Not having other gear options, I simply pedaled faster. About 100 rpm on a 66-inch gear is not terribly fast, but I closed the gap. Seeing the two cyclists in front of me grow in my eyes, was like a jaguar inching close enough to smell its prey. I pedaled faster. When I could tell that I made most progress on the climbs, it was like the old days where my small size and light weight gave me an advantage. I was back in the groove, and for a moment it felt like the old days. But only for a moment.
I exploded. I was suddenly reminded that I have no fitness. After a mile or two at what was clearly an unsustainable pace, I blew up like some over-hyped top fuel dragster engine. And just like that I sat up gasping, and watched them disappear over the next ridge. I told myself that I didn't care...that I'm just a tourist on my way to Colleyville and NOT in a hurry. Evidently, however, I wasn't listening to myself.
After plenty of time for recovery, I encountered another group of cyclists. In fact, they pulled onto the road right in front of me. Well, almost right in front of me. They were probably about 100 yards up. Actually, one guy was lagging the main group a bit, and preparing to bridge up. He was only about 20 yards in front of me. You already know what I was thinking. If I caught him, he'd tow me to the group, and I'd be able to sit-in for just a little while (for old times sake), and then ease off and let them go. So I stood to accelerate. Unfortunately, so did my helper. It was obvious that he didn't want to waste a bunch of time chasing the group in the headwind, and he certainly didn't see me as help. Then I gave it everything I had. He was so close, surely it wouldn't hurt long. It didn't. I never gained on this guy an inch, and I exploded within seconds.
I sat up again. I tried to get some air into my lungs. And as the spots in front of my eyes cleared, I saw them, all as one beautiful peloton, sail away from me. So I have a confession to make. Forgive me, for I have lusted for speed. For a few moments, I wanted my race bike, my fitness, and my youth back. I imagined doing interval sessions. I even imagined a new lightweight bike with no racks and bags...and brifters. Brifters! Oh, how far I've fallen.
I eventually made it to my brother's house. We had a great time watching my nephew play little league baseball. We grilled burgers, and ate ice cream. We watched more baseball. When it came time to head back to the prairie, I wheeled the bike around and noticed that it didn't roll well at all. That fat tire was squashed flat. But the flat tire, and the photo above doesn't have anything to do with my confession. At least I don't think so. You don't think that there are consequences that come to old men who lust for speed, do you?
Posted by Pondero at 4:46 PM