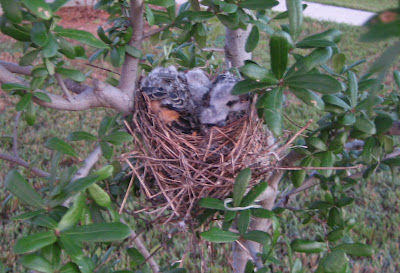 We've been enjoying the nest we have in our small oak tree out front. The birds have built it about chest high so we can check-in on the progress of the young ones occasionally. I'm pleased to report that all is well with our new brood, except the nest is getting crowded. The little ones are getting bigger. We've always called these birds scissortails. Here's what Widipedia had to say...

The Scissor-tailed Flycatcher (Tyrannus forficatus) is a long-tailed insect-eating bird closely related to the kingbirds.

Adult birds have grey upper parts and light underparts with pinkish flanks. They have dark wings and an extremely long black tail. Immature birds are duller in colour and have a shorter tail.

Their breeding habitat is open shrubby country with scattered trees in the south central United States and northeastern Mexico. They build a cup nest in a tree or shrub on a branch, sometimes using artificial sites such as telephone poles. The male performs a spectacular aerial display during courtship with his long tail streaming out behind him. Both parents feed the young. Like other kingbirds, they are very aggressive in defending their nest.

They migrate to southern Mexico and Central America. They regularly stray to the ocean coasts of the US and are occasional visitors to southern Canada.

These birds feed mainly on insects which they catch by waiting on a perch and then flying out to catch them in flight. They also eat some berries.

This is the state bird of Oklahoma.

From what has been observed so far, it looks like Wiki has nailed it. I'm grateful that our neighboring state of Oklahoma (about 25 miles away) allowed one pair to drift down for us to enjoy. Hopefully, these little ones will be getting about the business of catching flies soon.
Posted by Pondero at 5:50 AM